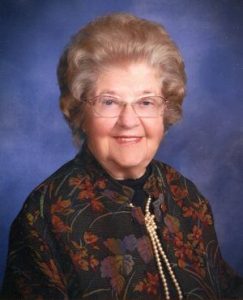 Doris L. Smith, 95, of the Lake Alice Community, died Wednesday, Nov. 4, 2015, at Heritage Estates in Gering. Visitation will be from 4-7 p.m., on Sunday, Nov. 8 at Dugan-Kramer Funeral Chapel. Private family interment will be held at Fairview Cemetery. A memorial service will be held at 1 p.m. on Monday, Nov. 9 at Heritage Estates in Gering. In lieu of flowers, memorials may be given to the First Presbyterian Church or West Nebraska Family Research & History Center. Her obituary may be viewed and condolences left at www.dugankramer.com

Doris was born April 6, 1920, in Scotts Bluff County, Nebraska, to Chet J. and Hazel M. (Smith) Stratton. She attended school at Lake Alice until the 10th grade, graduating as salutatorian from Scottsbluff High in 1937. She was united in marriage to Earl R. Smith on June 18, 1938, at Scottsbluff. The couple raised their daughters on the Smith family farm in the Lake Alice Community.

Doris and Earl were partners in the farming operation, with Earl running the farm and Doris handling the books. Doris took pride in raising a garden and chickens to provide for her family. She was an involved 4-H leader for many years and helped at the Scotts Bluff County Fair and served on the election board. She was an avid genealogist, documenting the Smith family tree back to the Mayflower. Doris kept track of everyone’s birthdays and anniversaries and was the family historian.

Doris was a member of the First Presbyterian Church in Scottsbluff where she attended bible study and helped with the womens groups. She was a member of the Rebecca Winters Genealogy Society, the DAR, and volunteered for the Hospital Auxiliary. She was an avid sports fan, especially baseball.